Phew, it’s been awhile. Hi there!

I thought I would quickly write an update for Fenn and I while our one-year-old little boy took a nap this afternoon. There were some big moments/changes/challenges this summer both for Fenn and I, but I guess that comes with the territory of toddlerhood and motherhood with CF. 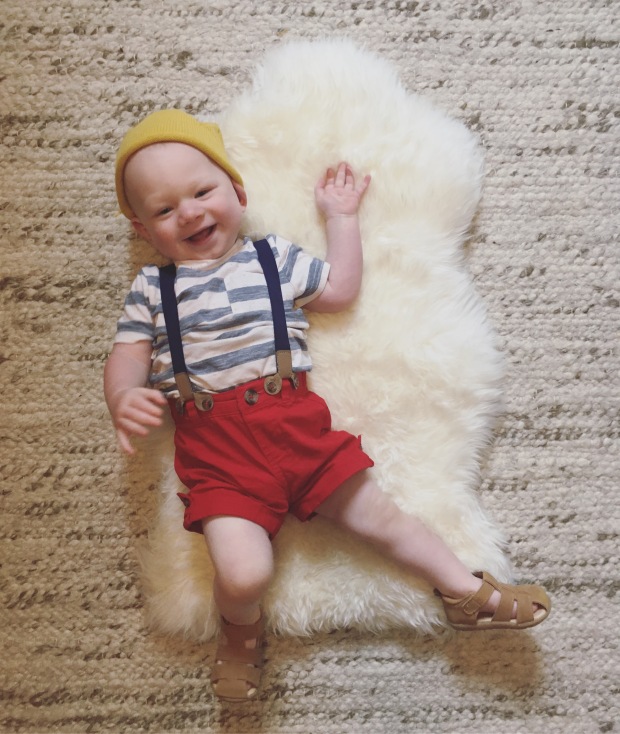 Fenn turned one-year-old in late August! I can’t believe he is a toddler now! Let me tell you, that little guy had so much fun at his “Growing Up, Up, Up” hot air balloon first birthday party. He tasted cake for the first time and knew exactly what to do with it. He also loved helping us open all his presents and being the center of attention. Even though he’s just a wee little one, he totally understood the party was for him and that he was special and so important to everyone. We loved having our friends and family celebrate our sweet boy and all the joy he has added to this past year.

Fenn has been walking for a couple months now and is quite good at getting around. He loves to do laps in our house and climb up and down the stairs (it gives me a heartache every time, but we do it). He is CONSTANTLY on the move and I am exhausted 99% of the time. We have been working on adding more words to his vocabulary with the addition of baby sign language. I am surprised daily how quickly he picks up on language. We have a talker! It’s fascinating to watch him understand direction and learn to communicate with the world around him, and with us. I love hearing him say, “Mama” and then watching intently for him to motion to what he needs. I know I say this during every new phase, but I am really enjoying this age watching him learn and grow so quickly.

At the moment, Fenn really enjoys reading and looking through books, whether that’s solo or with anyone who is willing to sit read with him. He enjoys listening to songs, will do a little dance, and loves any toys that he can bang together to make noise (hmmmm, our kitchen pots and pans). His other favorite toys include stacking cups, cars, and balls. He loves to climb on everything and can get a little naughty when he wants to. He loves all different kinds of fruit, chicken, various veggies, and puffs at the moment. We are also still breastfeeding three times a day. He is always, always hungry.

Fenn is very social. I’m talking wants-to-be-friends-with-EVERYONE social. He loves going to story time and interacting with the other kids and adults. He loves being around people. He loves giving hugs and playing with strangers. He is definitely a high energy extrovert, meaning I spent 99% of the summer chasing him around. Lord, give me strength, please!

Last week, we had a very scary choking incident with Fenn. He was snacking on watermelon (which he has had 100 times before) and put too many pieces in his mouth without me noticing. He began to choke, and I quickly realized I needed to sweep his mouth to remove the pieces and then use the baby Heimlich maneuver. He coughed the rest out, but was very unsettled, drooling, and acting as if he was in pain. When Peter got home about 30 minutes later, we took Fenn into the ER because my mama intuition told me something wasn’t right.

In the ER, It took a long time to calm him down, and it was the most anxious and helpless I have ever felt as a mother thus far. He had an xray and Tylenol, and then finally settled from pure exhaustion. Because of the serious nature of choking and possible aspiration, the ER staff thought it was best to be transferred him in the ambulance to the main Rainbow’s ER for more tests and evaluation. Right before we got in the ambulance, Fenn puked on me and seemed to be better and in no pain. I think whatever was stuck in his esophagus had dislodged. We were transferred downtown, and our recovered Fenny-Boy had a blast in the ambulance–smiling, gabbing, ripping off his pulse ox, and showing off for the paramedics :|. I was just happy he was acting himself again after the scary non-stop crying and obvious discomfort. I was just happy my baby was back. Once we were there, the Rainbow’s staff checked him over seeing he was obviously improved and said we could go home after nursing him.

Thankfully, Fenn is ok and recovered quickly from the very traumatic experience. I am just thankful I knew baby Heimlich and CPR because I NEVER thought I would ever need to use such training. Everyone is healthy and happy now, but the Lord protected us throughout that night by keeping Peter and I calm and attentive and encouraging Fenn to be a good patient. 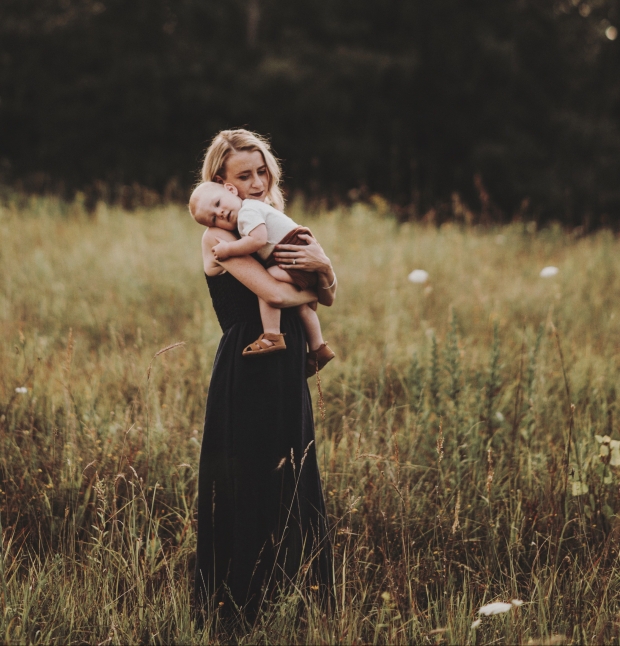 Personally, it’s been a very challenging summer for me in terms of lung function and health. I started the summer off with two weeks of home IV antibiotics due to feeling tired and short of breath, and eight weeks later I was back on IVs again. IVs were not what I wanted to spend my summer doing but it happened and we made it through feeling better and stronger.

Prior to the most recent round, I felt “ok” but my lung function took a big hit. At my appointment, I blew a 48% and then eventually working my way up to a 53%. I knew I couldn’t sit with those numbers below my baseline and risk a permanent decline, and so I discouragingly made the decision so start three different home IVs again only eight weeks after the first round. I was discouraged. I was sad. I cried on the way home and had to mentally prepare myself for all the work and flexibility IVs demand from our family. I was doing everything right and yet somehow, I still ended up back in that “place”. That’s one of the most exhausting and disheartening parts of living with cystic fibrosis, and it can feel very emotionally painful sometimes. All my efforts to keep myself healthy weren’t enough, I needed to spend this summer with some extra help, and that’s the reality of CF.

I slowly started to notice minimal improvement on IVs, but didn’t feel I was improving, both symptomatically and clinically, as fast as I usually do. That’s when around 5 weeks in to my second course of IVs I started to feel as if I caught the stomach flu due to horrible stomach cramping and no appetite. I waited a couple days, hoping it would pass, but when the pain got more intense and I was obviously dehydrated (we were concerned for my kidneys because of the IV antibiotics), so my mom joined me on a trip to the ER. A CT scan confirmed what I feared; I had a complete bowel obstruction in my small bowel just below my stomach. DUH DUH DUH. 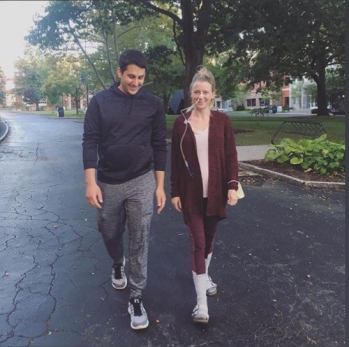 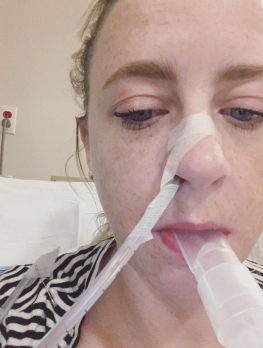 In the ER, they place an NG tube (a tube that goes through your nose down into your stomach) and suctioned the contents of my stomach to give me some relief. I received a bunch of IV fluids, nausea meds, and I felt much, much better. Then, I was transferred via ambulance to the main campus of UH and immediately admitted.

Over the next couple days, I was on bowel rest, nothing by mouth (not even ice chips, uhhhhh), and intermittent suction through my NG in hopes the release of pressure would relax my digestive tract. After I was suctioned dry, we then tried various solutions through my NG tube to try and dislodge the blockage. No luck there. We weren’t sure what was causing the blockage: old mucus, scarring from my appendectomy, or poop (of course). Bowel obstructions are very common in CF, but my blockage was in an uncommon location and so both the surgical and CF teams were a bit stumped at first.

Truthfully, I do not wish a bowel obstruction on anyone. Being filled with liquid when your body can’t digest and remove it, is simply horrible. At one point, my stomach was contracting so badly, trying in effort to move the blockage and solutions and my NG tube had clogged, the surgical resident had to replace it with the largest tube they could fit. Talk about an intense nose hose! My eyes watered like crazy! Thankfully, the first placement was successful, my stomach was suctioned once again, and I enjoyed a couple rounds of morphine after because the consistent stomach cramping was unbearable. I would equate the stomach cramping equal to my drug-free labor. I am as serious as a bowel obstruction, here. I am not someone who takes narcotics lightly, since I have a very high pain threshold, so you can imagine what this experience was like.

After a couple days of no good news, I was scheduled for surgery the following day (something we were desperately trying to avoid). Abdominal surgery is tough to recover from when you cough and have to do airway clearance. Also, one bowel obstruction surgery greatly increases your risk of another bowel obstruction. We were out of time and options. Until that afternoon, my CF doctor burst into my room and said, “If we go to radiology now, I bribed a guy with champagne to do a procedure on you.”

“Cool, lets go,” I said. I blindly got in her wheelchair and off we went.

I’ll leave it up to your imagination of what they did to me. But, I can tell you it included the head of radiology, a very large tube connected to a gallon of liquid, an x-ray machine, and an inversion table….

Thank goodness it worked! And thank goodness, I have a doctor who is willing to hand deliver me to radiology and be the absolute best advocate she can be for her patients. She promised me I would get home to my baby, and she delivered. I feel very blessed I am under her care. I left a couple days later, with all my bowels in tact and a strict order to never eat Pirate’s Booty White Cheddar Popcorn again. That’s right, Pirate’s Booty betrayed me. We saw the evidence with our own eyes. (No this is no sponsored. Please drink adequate water and consume at your own risk.)

Even though it was a difficult hospital stay, the worst part was that my admission was so abrupt and unexpected; we didn’t have a plan for Fenn. Thankfully, our families rallied together and he was cared for and even came to visit twice while I was in the hospital for a week. I missed him so much and felt very anxious about being away from him. I continued another two weeks of IVs once I was home and started to work on gaining the 8 lb. I lost back. After seven weeks of IVs, my lung function went back up to a 59% and we let my body rest. Overall, the summer was fun, joyful, and busy, and we came out both surviving an ambulance ride and and some challenging moments.

Thank you everyone who watched Fenn and cared for our family this long, difficult summer. Here’s to a healthier fall! 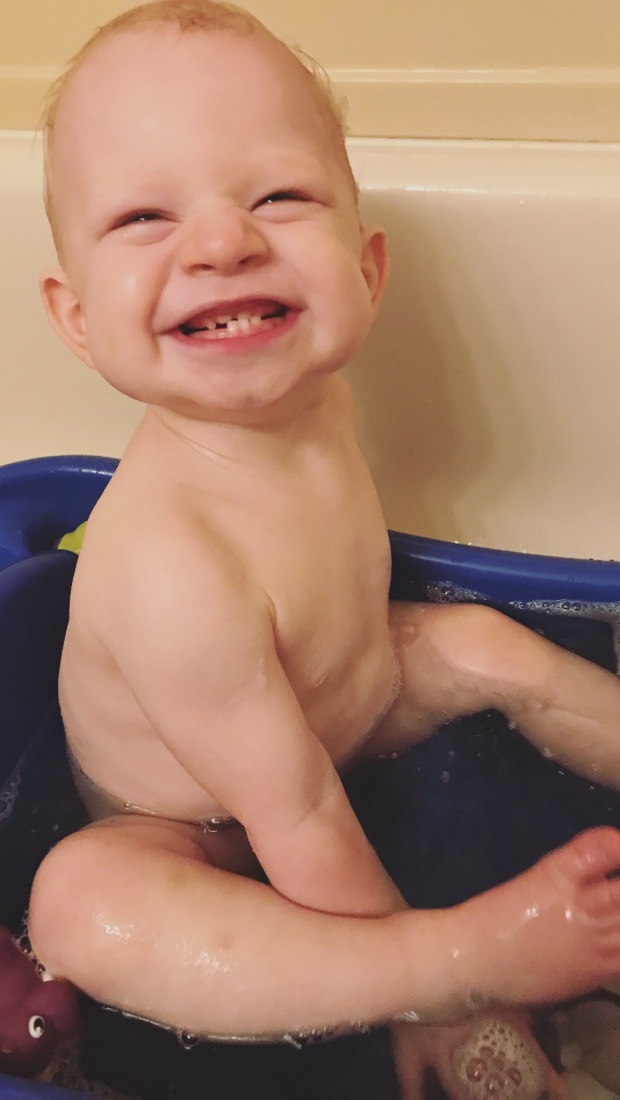 The musings of a 20-something year old with cystic fibrosis.